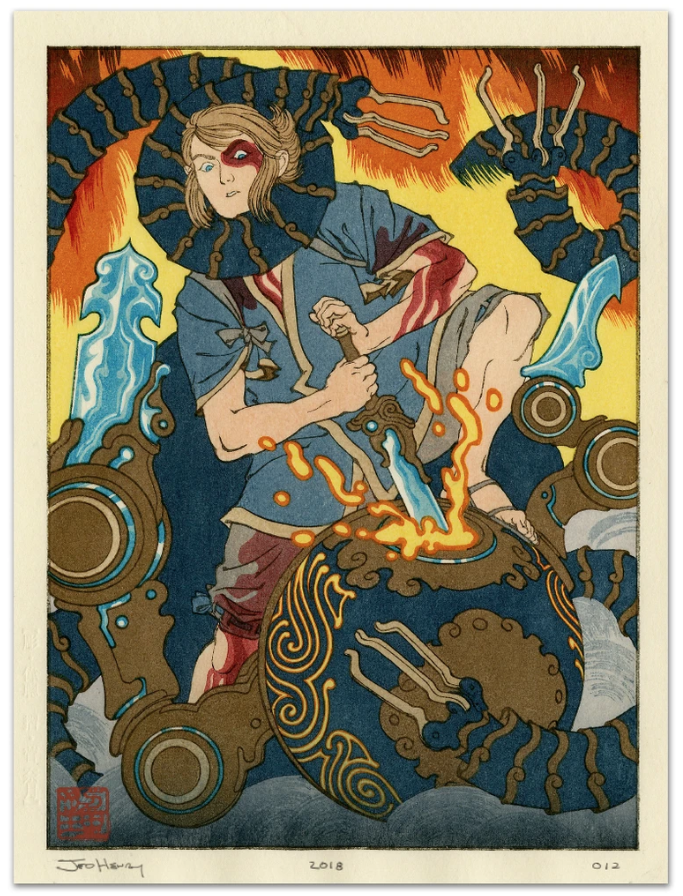 A Trial of Strength

Designer Jed Henry spent dozens of hours -ahem- researching the game depicted here, exploring every corner of this vast magical world. We hope this design brings back fond memories for you of the first time your strength was tested, and with grit and determination, you emerged victorious!

This design requires many individual impressions to achieve a full range of color. David uses the finest quality of yamazakura (mountain cherry) to carve his printing blocks. The wood is capable of holding a very fine level of delicacy – every last detail is printed by the wood left standing, after the rest has been cut away.

The paper is handmade Echizen Hosho Washi, made by national living treasure, Iwano Ichibei IX. This is the exact same paper printers used over 200 years ago! You can see a video of Mr. Iwano at work here.

Jed Henry grew up in rural Indiana and “fell in love with video games”, most of which had their origins in Japan. “I escaped into the world of heroes, competition, and fun that Japanese gaming offered. Later, I served an LDS mission in the Tokyo area, where I fell in love with Japan and the Japanese people. Then, while a student at Brigham Young University, I had the opportunity to study Japan’s culture and history alongside my major field of animation. I began to wonder if there was a way to bring all the places, people, and characters I loved into one medium.

For hundreds of years, Japanese woodblock printmakers worked in a thriving popular art scene. Their prints depicted heroes, villains and monsters, spanning every genre from satire, to romance, to horror. This heritage is especially evident in Japan’s video game industry, a new chapter in an ancient, enduring culture.  To celebrate Japan’s contribution to video games, Jed took his favorite game characters and returned them to the ukiyo-e woodblock-print style. He lives in Provo, Utah with his family.