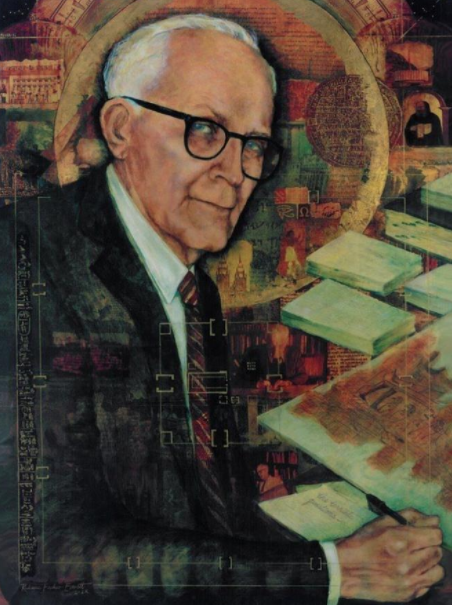 Hugh Nibley, Scholar, Educator and Doorkeeper of the Lord

Oil on board with 24k gold leaf on board

Painting commissioned in 2000 for the opening of the Hugh W. Nibley Ancient Studies Room in the Harold B. Lee Library, Brigham Young University.  On back of panel is a collage with a 1992 etching by Rebecca Everett titled “The White Stone” and two poems by Everett in honor of Nibley, one titled “The Blueprint (upon pondering Nibley’s Temple and cosmos)”, and the other poem contains the date of the work “in honor of Nibley’s 90th birthday.”

A Note of Explanation Upon the Portrait of Dr. Hugh W. Nibley Or: An Approach to the Portrayal of A Doorkeeper of the Lord

By… an Ignorant Peasant [the artist, Rebecca Everett]

I have truly enjoyed the whole process from thought to finish.  I’ve developed the piece to attempt to include many ideas and images that I could associate with Brother Nibley and his life’s interests.  It is built upon a collage of images from the Dead Sea scrolls, the Nag Hammadi, the facsimiles, images of various temples, ancient and modern, and images from the holy land and of the BYU campus area where he has spent so much of his time teaching and in research.

Additionally, placed over the collage, is the shape of a large circle, a reminder of the prayer circle, the sun, the symbol for time, or a day; the disk of the sun god Ra; Uroboros, a ring, eternity…etc. This I have delineated in 18k gold leaf with a sketchy inner edge and a defined outer edge, aligning with arches on the upper corners of the piece, formed by images of papyrus-headed pillars from an Egyptian temple.  Up in the bits of sky visible outside the arches and bounded by linear representations of the square and the compass, are constellations of, on the left: the Big Dipper, by which most of us orient ourselves to find the North Star, and on the right: Orion, of all the constellations the one most easily recognized by anyman, and thus perhaps an entry point, or a first step toward a personal and intimate contemplation of the mysteries of God.

The portrait itself is painted in oil on velum, and superimposed over the collage and further developed in many layers of glazes so that the underlying images are secondary to the portrait, yet still discernible.  I wanted to portray the nobility of scholarship, the quizzical disinterest in the honors of men, and a subtle but definite twinkle in his eye that speaks of the deep joy he derives from the daily study of the gospel, and the surprise and delight of encountering truths dressed in types and metaphors.

Also inscribed in gold ink and forming a sort of frame to the bottom third of the painting, and into which descends the lower third of the large circle, (making a sort of overall under-image of the hieroglyphic symbol for the horizon) is the outline of the temple plan, as found on the Qumran Temple Scroll.  I especially liked how the East gate centers upon Brother Nibley’s point of concentration in the small image of him at work on the image from The Book of Breathings, and that the “Holy of Holies” lies directly over his heart.

Included in the piece are his ubiquitous stacks of hand-written 3×5 cards, which I felt MUST be a part of any true portrayal of the man, along with a book of scripture close at hand.  And of course there is the wonderful bit of papyrus that shows the image of what we call “Facsimile Number One”.  My husband, Dennis has recounted to me his memories of Brother Nibley’s office in the JSB, when he had a janitorial job as a freshman back in 1969.  He will never forget the frisson of heightened feeling, a sort of reverence that fluttered over him as he attempted to sweep while maneuvering between the walls of shoe boxes full of documents and carefully dusted around the stacks of notecards without disturbing anything.  He knew that office was the workplace and second home of a true scholar.

Along the left edge of the piece I’ve inscribed a column of hieroglyphics that (I DO hope!)  read:  “I, Rebecca, make this offering; this portrait, or image; this likeness or similitude; by my two hands, actually; as an honor, or in honor of  ~(Hugh Nibley)~ (in a cartouche) He who perceives and understands truth; discovers or uncovers things that are hidden; pertaining to ancient documents or manuscripts; an instructor or teacher; a very learned and educated man; a just and truth-speaking man; an un-tier of knots or a solver of difficulties; an expert, an adept; concerning old records and ancient laws; a truthful scribe; a whole lifetime; his heart was glad to do it. In celebration of his 90th birthday:  All Life! All health! All prosperity! All stability! All joy of  heart!”   This took me days of happy study to figure out how to write it all.

I wanted the overall tone of the piece to be warm and quite rich, in deep sepias, siennas, ochres, golds, and the colours of old parchment and reddish sandstone, with some grey-blues and deep greens.  I have framed it in a wonderful large but simple moulding in an antiqued finish of mottled green and gold, with a flax-coloured liner.  I am also a framer, and felt it would not be right to leave the final presentation to another.  I am very pleased with how the framing suits the portrait.  It is elegant, but not grand or fussy.

I have been a hungry student of Brother Nibley’s writings all of my adult life and feel particularly honored to have been given the opportunity to paint his portrait.  Throughout my artistic life many of my etchings and other works have begun as sparks of inspiration during happy study of  Brother Nibley’s works.  Thus, he has doubly blessed my life.