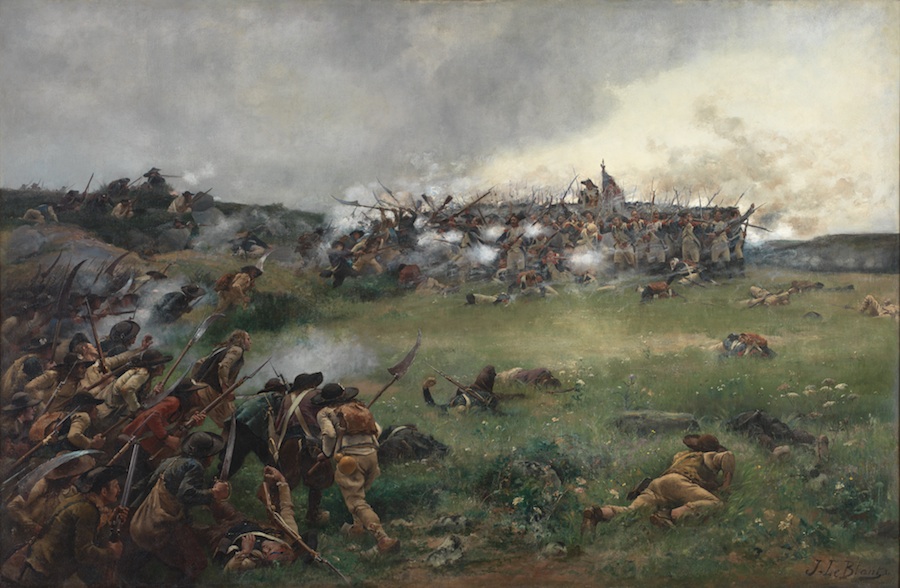 Le Bataillon Carré, Affaire de Fougères 1793 (Square Battalion) is one of Julien Le Blant’s (1851-1936) best-known works. It was exhibited in the Paris Salon in 1880 and at the Paris World’s Fair (Exposition Universelle) in 1889, where it was awarded a Gold Medal.  Le Bataillon Carré was reproduced as a photogravure and distributed internationally. Purchased for the National Gallery of Australia, New South Wales, it was de-accessioned some years ago, when the great artists of the French Academy and the Paris Salon were least appreciated.

Le Bataillon Carré translates as “The Square Battalion” and refers to the 18th Century tactic of the infantry square. The painting depicts an ambush in La Vendée during the insurrection in that region, following the French Revolution, one of history’s great upheavals. “The whites,” as they were known, located in the left foreground, are rushing up from a copse or small valley, to reinforce their comrades who are already engaged in hand-to-hand combat with the government troops. Another group of counter-revolutionaries has sprung up from the rocks at the left edge of the composition and are firing on “the blues”. The blue-jacketed troops, seen in the center of the composition, have formed themselves into an infantry square. In this defensive maneuver, the soldiers adopt a four-sided formation. Each side of the square has three ranks. While the first rank is firing their single-shot muskets at their attackers, the second and third ranks are reloading. By forming into a square, they are able to defend themselves from attacks that come from any direction.

This painting was beautifully described in the catalog of the Exposition Universelle (1889): “One of the most promising of the manor-born members of the family is M. Julien Le Blant who like Girard (Ernst Girard, 1813-1898), has a great affection for the incidents of the Civil War in La Vendée, of unhappy memory. Two of the most important works that he devoted to this historical theme appeared in the Exposition, and of the most famous of the two, we give a photogravure. Le Bataillon Carré first appeared in the Salon of 1880, and it is one of the best of the battle-pieces of the whole Exposition. Nothing could be finer in its line than this epic presentation of the imperturbable square battalion of “the blues” making face in all directions against the fierce rush of the stout-hearted peasants, who died for the priests and the king.”

Because of the enormous size of the painting, Le Blant was able to paint each of his figures in detail. The valiant “whites” in the foreground appear to be little more than loyalist farmers. Le Blant shows them attacking fiercely, armed with their scythes and shotguns, rather than proper military weapons. These famous “whites” of history had their story told in the romantic fiction of the “Scarlet Pimpernel.” Several of their comrades are shown lying on the field of battle, felled by the fusillade of the revolutionary army. The government troops are shown firing a broadside directly into the “whites” who are already in their midst. The landscape the soldiers and revolutionaries are contesting, is beautifully painted. It clearly depicts a battle in the spring months, for the grassy field is thick with wildflowers. The sky is overcast, as it often is in central France, where this scene would have taken place. The smoke from the musketry drifts off into the sky in the background.

M. Julien Le Blant was born in 1851. He came from a well-to-do family and his art education took place in Paris, where the reference works state that he studied with Girard. Presumably this was Ernst-Joseph-Angleton Girard (1813-1898) who was a student of d’Isabey. Le Blant made his debut in the prestigious Paris Salon in 1874. He was awarded a Bronze Medal in 1878, a Silver Medal in1880 (possibly for this painting), and a Gold Medal at the Exposition Universelle in 1889.

Julien Le Blant was a painter who spent his entire career focusing on military subjects. In order to ensure accuracy in his paintings, he was an avid reader of books on French military history and he had a large library.  He collected uniforms, muskets, and decorations. In his studio he was able to equip his models in the correct uniform for the scene he was painting. It was his dedication to accuracy, in addition to his artistic ability, that made his works popular with collectors. While his major works were in oil, Le Blant painted smaller, less ambitious works in watercolor, which were widely exhibited.

Like most painters of military subjects, Le Blant often painted the Napoleonic period. In his youth, during the Second Empire, the Napoleonic era was considered France’s golden age and military painters grew wealthy painting depictions of the Emperor’s successful military campaigns. These works took on a greater degree of realism after France’s humiliation at the hands of the Prussians in 1870. Because the battles took place so close to Paris, many of the painters were able to actually see the horrors of modern warfare; this encouraged them to not only paint the glories of combat, but its tragedies.

Perhaps because of his family background, Le Blant also liked to depict the famed “whites,” the peasant farmers who opposed the revolutionaries in the Vendée region in the years of civil strife that followed the French Revolution. Le Blant’s works were selected to represent France in the 1893 Chicago World’s Fair known as the World’s Columbia Exposition. He was singled out for praise in the official catalog section devoted to the art of France: “Grolleron and Le Blant are in better taste, though they approach their subjects from very different points of view. The former renders a good dramatic incident in a serious and well-considered composition, soberly and rather better painted than usual; the latter brings a sly touch of sarcasm and humor. His ‘Retour du Regiment’ – from the heroic army of the Sambre-et-Meuse, we will suppose shows the grimy, ragged and ferocious battalion drawn up for inspection in the public square and idly reviewed by a supercilious crowd of dandies, muscadins and incroyables, each with the dernier cri de la mode and each more absurd than his neighbor. The warriors scowl darkly under this complacent observation, and there are signs of an outbreak by one or two of the older moustaches.”

Le Blant exhibited at the Paris Salon and at Parisian galleries. He was a member of the Société des Artistes Françaises. Recognized for his artistic achievements, Le Blant was made a Chevalier de la Légion d’Honneur in 1885. His date of death has not survived, possibly because of records that were destroyed in the course of two World Wars.

A painting of this size and scope would have taken the artist a period of months or even years. The French genre painter of the 19th century was usually a specialist in a narrow range of subject matter. By specializing, an artist could develop a great depth of knowledge about the subjects that he or she painted. Some painters of the day specialized in historical subjects from ancient Greece or Rome. Others were known as “Orientalists” and they depicted life in the Middle East. Still others specialized in historical cavaliers or Cardinals. There were a number of French and British painters who spent their entire careers painting thoroughly-researched and beautifully-painted depictions of military campaigns.

For a painting of this size, the artist would have begun with a series of “thumbnail” or idea sketches, which would gradually become more and more refined as the composition took shape in the painter’s mind. Each of the major figures would have required a series of drawings, done from models posed in clothing and carrying equipment accurate to the period that was being depicted. Then, these groups of figures would have been drawn together, to the scale planned for the finished work. Usually, the next step would be to draw a “cartoon”. This would be a large drawing that was the exact size of the final composition. This cartoon, once finalized, would show the relative positions of all the major compositional elements. The elements of the cartoon would be transferred to the primed canvas. Once the composition was drawn in, the artist would finally be able to paint. For a landscape subject, such as Le Bataillon Carré, the painter would have probably have done “plein-air” landscape studies on location, in the actual setting that he had chosen for the painting. These would insure that the finished painting had a quality of rich natural color and atmosphere as well as historical accuracy.

Paris has been called the “Capital of the 19th Century” and indeed it was, especially for art. Paris was the site of three world fairs between 1878 and 1900. It was in 19th Century France that classical painting reached its apogee. In that era, Paris was internationally renowned for the high quality of the artistic instruction available. Thousands of artists from around the world ventured to Paris to study at the official Ecole des Beaux-Arts, at private ateliers like the Academie Julien, and directly under master artists who had won their fame at the Paris Salon. In drafty, smoke-filled studios, the art student or “élève” spent their early years drawing, first “from the antique” and then directly from life. For a period of months or even years, the student would only be allowed pencil and charcoal, eventually graduating to paint and brush when their master felt they had mastered drawing. By learning the age-old techniques of optical measurement that had been handed down from master to student since the Renaissance, they achieved a degree of accuracy that has not been replicated since.

During the 19th Century, a painter’s career was made by his participation in the annual Salon. After a jury of acceptance chose his work from thousands of submissions, the artist faced the prospect of where it would be hung. New artists often saw their works hung a dozen or more feet in the air, a practice known in England as “skying”. As a painter became more established and built a constituency among collectors, their works would be hung “on the line” at eye level. The annual Salon de Paris or the Annual Exhibition of the Royal Academy in London drew hundreds of thousands of visitors and many hundreds of works of art were exhibited. It was a very competitive environment; the artists whose works were not selected for the annual Salon had little hope for artistic success. This is why Impressionists felt compelled to mount their own alternative exhibition, the famous Salon de Refuses.

From the founding of the French Academy in the 17th Century, the most admired painters were those- like Le Blant- who specialized in “history painting”, the depiction of important events of the past. Their compositions were religious, allegorical, or depicted a turning point in history. Because of the great difficulty in composing large paintings with dozens of figures and achieving believability, these paintings were accorded the highest praise and usually fetched the highest prices. Jean-Louis Ernst Meissonier (1815-1891), the best known of the 19th Century military specialists, was generally thought to be the most successful artist in 19th Century Paris. As his career progressed, he grew rich, not only from the sales of his works, but from the royalties he earned from reproductions, which were distributed around the world. Wealthy collectors from America and other nations attended the Salon and the Expositions Universelle in Paris in order to purchase works by the most popular French painters. On their trips to Paris, wealthy American industrialists built large collections of works by the most popular French artists and these works were the nucleus of many of our great museum collections.