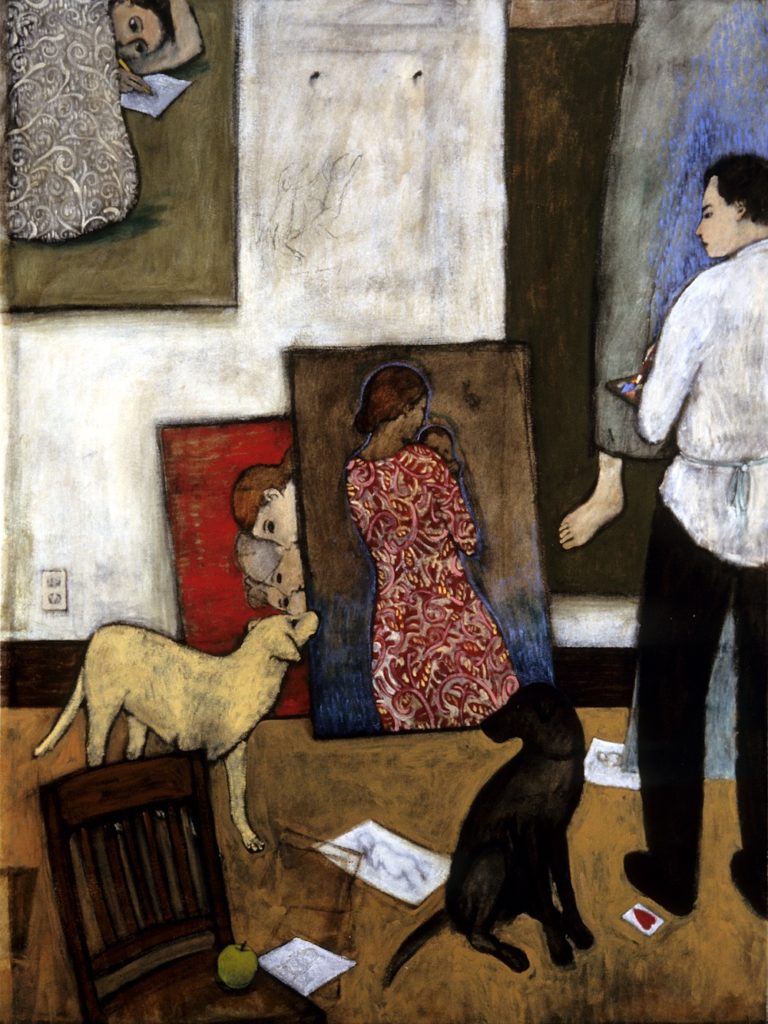 Dogs With Paintings of Women

The Lee Library is pleased to host one of Utah’s most popular artists, Brian Kershisnik. Brian’s new exhibition, “Dogs with Paintings of Women” will be on display November 18–December 31, 2004, in the Lee Library’s Auditorium Gallery (1080 HBLL). Brian is also participating in the BYU Visual Arts Lecture Series program in the Dept. of Visual Arts where he will talk about his art and do individual consultations with Visual Arts students. If you are a Kershisnik fan, you will certainly be delighted with his new works. If you are not yet familiar with his paintings, be prepared to enter a beautiful visual world.

Brian grew up in Angola, Thailand, Texas, and Pakistan. He graduated from Brigham Young University, during which studies he received a grant to study in London for six months. After graduate studies in Austin, Texas, he and his young family moved to Kanosh, a very small town in central Utah, where he paints and works on his house. He has 3 children and a black dog. “In a community filled with births, deaths, marriages, droughts, times of plenty, triumphs, tragedies, indifference and faith, I continue to learn about the hand of God and about being a human being, the essence of art.”

When describing his art, Brian believes that he makes “paintings about being human.”

“My artwork is not so much a visualization of an ideal, as it is an exploration of the process that leads to an ideal, the often awkward practicing, the occasional detours and lost ground, as well as the triumph of joy.”

“My paintings emerge from my love and faith, my fears and awkwardness, from my euphoria and failures together.”

“My paintings emerge from living with people (and my dog) and from affection for the processes I use to make pictures. Although my skills of observation and craft are good, there is a fundamental element, which makes a picture succeed, that is outside of my control. It is a gift of grace every time it occurs and is always a surprise. This element eludes me every time I try to control it. When a painting succeeds, I have not created it, but rather have participated in it.”