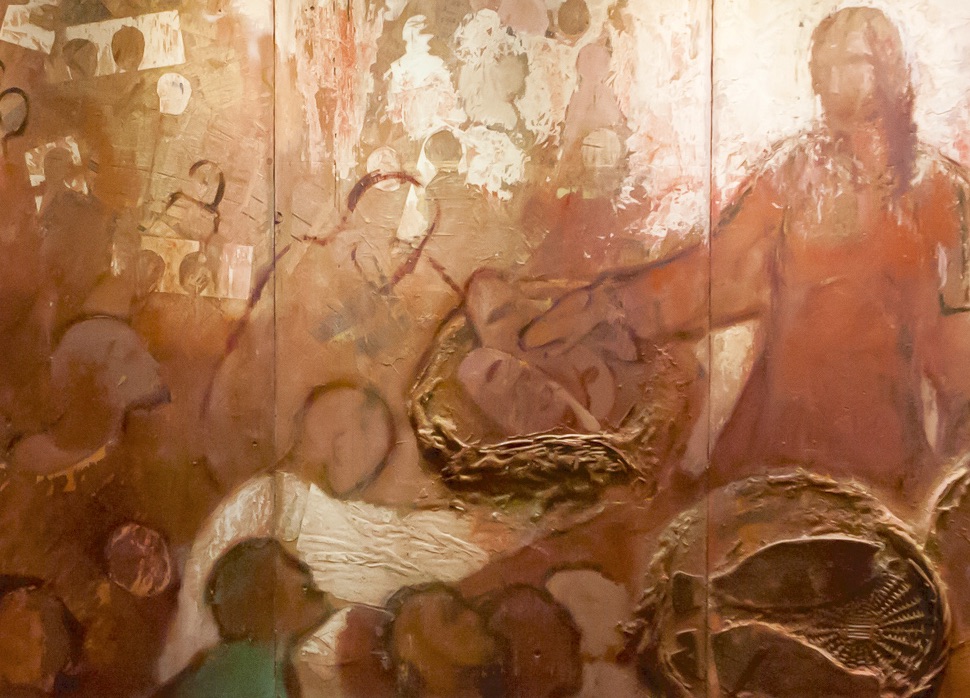 Local artist J. Kirk Richards has teamed up with BYU student Chiloba Chirwa, depicting scenes from the life of Christ for an exhibition at the Harold B. Lee Library, “From My Brother’s Perspective”. The exhibit, on display by the level one auditorium through September, showcases evocative, earth-toned paintings by Richards, and exuberant, tribal-inspired work by Chirwa as they portray biblical scenes.

The two artists met when a mutual friend showed Richards a drawing by Chirwa. The two admired each others’ work and soon began plans for this exhibition. “We sat down and discussed this show at Slab Pizza about six months ago. Maybe eight, actually.” says Richards, “Then we gradually moved into planning and building panels about five months ago. Most of the painting has been during the last three months.”

When asked to describe his painting style, Richards responded, “I’m a spiritual symbolist; I use the human body as a symbol for a religious concept.” Then he paused. “Tell them I’m stylistically undecided.” His paintings are raw and expressive, using rough strokes and bold lighting to bring power to the scenes he depicts, and his work has been featured in LDS publications like the Liahona, Ensign, and the cover of Jeffrey R. Holland’s book, “Broken Things to Mend“.

Chiloba, a BYU student from Lusaka, Zambia, is a Construction Management major who paints as a hobby. While he typically paints more realistic figures, he decided to channel his African roots in his depictions of traditional Christian scenes. Describing his “Mary and Martha” painting, he said, “African women are excited and jubilant. They’re graceful. I wanted to portray how they might actually react to meeting Jesus; they wouldn’t be humbly sitting there. They would be rejoicing.” Motifs, energetic figures, bright colors, and tribal fabrics give his biblical paintings a refreshing and unique energy.

To learn more about the two artists and their work, check out the show, “From My Brother’s Perspective” on level one of the Harold B. Lee Library through September.

For even more, check them out on social media here: