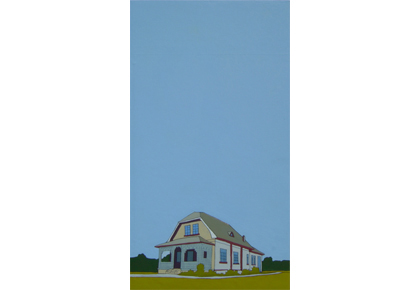 I was working in the BYU Library in 2003 when I met Mark Grover a Latin Studies Librarian. He asked me to participate in an ORCA Mentoring Grant that would take me to Argentina and Brazil. Since I was an art student he asked me to paint historical church sites in these two places. One of the sites I painted, but didn’t actually visit, was the first chapel in Brazil. This chapel is located in the city of Joineville Brazil, in the state of Santa Catarina. My grandfather David Ballstaedt helped build this chapel in about 1930 when he was serving in the then South American Mission. At this time the South American Mission home was located in Buenos Aires Argentina.

The grant began in June of 2004 and took me first to Buenos Aires Argentina where I stayed with my “Argentine Parents” Nestor and Rosalina Curbelo. They are originally from Uruguay but have lived in Argentina for most of their lives. They picked me up at the airport, took me to dinner, gave me food for my entire stay, and let me stay in their apartment. Nestor took me to visit many historical church sites in Buenos Aires including The Praca 3 de Febrero, which is a park in Buenos Aires where Melvin J. Ballard dedicated South America for the opening up of missionary work on December 25, 1925. Some other sites of interest that we visited were the Liniears Chapel, which was the first chapel in South America, and The Buenos Aires Temple.

Nestor lives just a few streets away from the Buenos Aires Institute where he works for the church as the Institute director. The Institute building is a beautiful European looking house that has been wonderfully restored and has intricate wood work inside. It was a beautiful walk from his house to the institute. Tall skyscrapers lined up along each street giving me the feeling that I was in a series of small canyons with narrow walls of buildings and windows on each side. The sidewalks were beautifully tiled with designs and cobblestone. I attended Nestor’s class at the institute with Argentine young adults. The Institute became a special place to me. Shortly after I arrived in Buenos Aires the young adults had a party at the Institute building. There was a barbeque and the students invited me to sit around the table with them and we drank some kind of mashed up grass in hot water which we each sipped out with a metal straw before passing it on. That same night we all walked downtown to see Shrek 2.

One night I went out with Estella Nunez. She was a member of the church who spoke English and worked at the American Embassy. We walked around town, ate empanadas, got lost in the rain on a walk until 2 or 3 in the morning, and then she walked me home because I didn’t know where I was. We sat on the steps of Nestor and Rosalina’s apartment, sheltered from the rain until her taxi came. She gave me a kiss on the cheek like they do in Argentina, and got into her taxi and drove away. The next day I flew to Brazil. This year I saw Estella on temple square where she is serving as a missionary.

One of the best moments of my trip came when I surprise-visited a family I had taught on my mission. The two daughters were so surprised when I walked in the door that they started crying. This family was baptized when I was in their area in 1998, and a year later in 1999 I was able to see them go through the Sao Paulo Temple as a family. I was sad to learn that lately the children, Tais 21, Ariana 20, and David 18, seem to be somewhat inactive. I was happy to find out that the parents, Luiz and Bia, are very active and go to church every Sunday. It was wonderful to sit down with all of them at the table and eat my favorite food in the world: Brazilian beans, rice, meat, and juice. I was also able to go to church with all of them.

I am very grateful to the ORCA Mentoring program and Mark Grover for allowing me to visit South America in order to paint these paintings, and allowing me to be able to see wonderful church sites and visit such nice people.