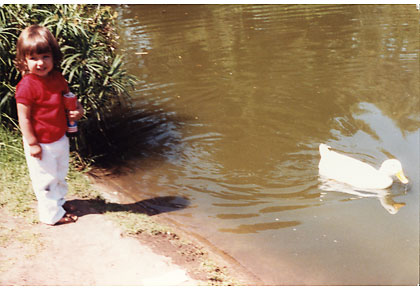 I have a photograph of myself from 1983, standing next to a pond with a duck swimming nearby. Under the photo my mother has written, “near the duck pond in L.A.—about to fall in.” I have no memory of the actual event, but this photograph is imprinted on my memory. In my mind, the photo breathes. The frame shifts so that I am the focus, the duck forgotten. My two-year-old toes inch closer to the edge of the water, and suddenly I am in the pond. My father (was he the one taking the picture?) rushes to fish me out, and I can hear my mother, as she recounts the story, say “I had packed extra clothes for you, but not for him.”

Photographs have played an important part in my life, both before and after I became a photographer. On a trip with my grandfather to his homeland, India, my role was to document the country, its people, and his past. This was my first visit, and I felt inadequate. How could I take photographs of people with whom I could barely communicate? What right did I, practically a stranger, have to make statements about them through my images? I photographed furiously, all the while wondering what purpose my photography should or could serve. One night my grandfather called me in to look through family photographs that his brother-in-law had pulled out. There were some familiar faces—my aunts and uncles on their trip to India years before, cousins that now lived in the U.S.—even a photo of my immediate family that someone had sent to Uncle. But the photo that held my attention was not of anyone that I had met. It was a photograph that I had seen at another house on this trip, prominently displayed in the sitting room. But for some reason, while holding this smaller print in my hand, I felt a strong connection to the woman looking out at me. She looks about my age, is sitting in a chair, holding a baby on her lap. There is a toddler at her side, his hand on her shoulder. She looks straight out of the photo, and although time and culture separate us, I feel that she is not so different from me. She seems confident and content, two things that I would love to be, and sometimes am.

Although the rest of my time in India was still difficult, the memory of that photograph and the feelings that came with it stayed with me, giving me a measure of peace. I was happy to have found one answer to my questions about what the purpose of photography should be. Much of the reason that I had wanted to come to India was to feel a connection to my heritage. It was hard to feel that connection when so much separated me from my Indian relatives—language, culture, and religion, to name a few. But this photograph helped me strengthen that connection. There are many other photographs that stay in my memory. Photos of those I know—my great-grandmother, Betty, at age three, standing in a window seat and holding a rose (she refused to be photographed until she got to choose a rose from the garden.); my mother and father proudly posed together holding me, a baby, on their joined arms. There are also photographs of those I’ve never met—my great-great grandfather, Daddy John, a real cowboy; my great-aunt Mary, who died in her twenties of cancer. These photographs, although not valuable in a monetary sense, are some of the greatest heirlooms I have.

As I started to think about these photographs of my ancestors, I began connecting certain images to current family members, finding some link in age, role, or other characteristics. For example, the photograph that I found in India reminded me of my Aunt Janice, also a young mother. So I started gathering old family photos and thinking about portraits I could take that would be similar. I like the idea that besides making connections between generations, I am also making artifacts for the future. I am not interested in comparing the two photographs to see how things have changed. Instead, I want to examine what is similar, what is common because of our shared humanity.

In a way, this show is an attempt to do for someone else what that photograph did for me in India—a thank-you for all the memories that have been passed on to me through family photographs, and hopefully artifacts for those who follow to inherit. I find that memory is a theme that comes up again and again in my work, probably because it is such a presence in my life. Sometimes the past is palpable, as something triggers a memory for me—a place I’ve been before, a song, a flavor or a scent. The past, present and future are layers that sometimes overlap, especially during these last few years, as I’ve returned to childhood haunts while living in the house my mother grew up in. So here I am standing in the present, glancing back to the past, holding something out for the future.