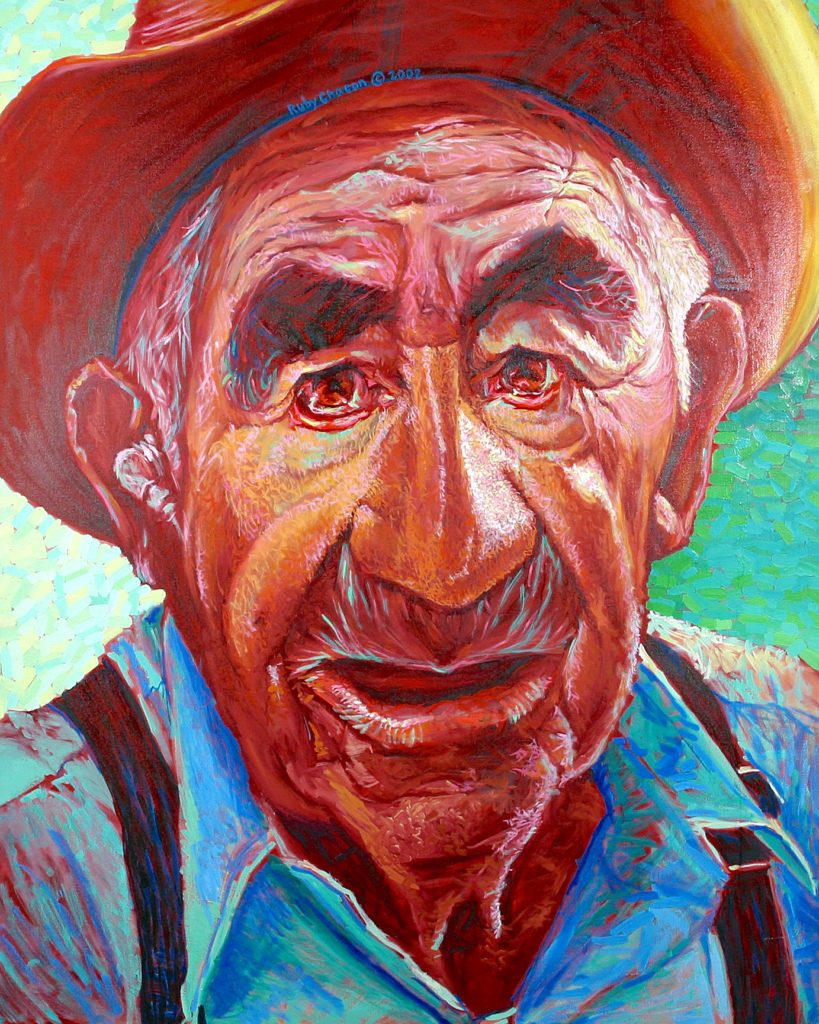 Ruby Chacón is a US born Chicana painter, muralist, and chalk artist actively involved in representing social, cultural, and political work histories of various ethnic groups in society since the late 1990s. In 2003, she co-founded the Mestizo Institute of Culture & Arts, in Salt Lake City, a non-profit organization. Ruby is the in-house artist at the Mestizo Institute Art Gallery, representing Chicana/o, Latina/o, American Indian, and other underrepresented groups in the state of Utah. She was a visiting artist at the BYU Harold B. Lee Library in 2003, with the powerful exhibition “La Gente.”

“More than a thousand years ago, I had ancestors that came through Southern Utah and scribbled their tales on the red rock walls. It was their way of saying this is who we are, this is how we live, and this is what we fear. They left their stories for others to see, but more importantly, for themselves to see. After the Mexican American war, a significant change took place in my family. Other people began to tell our story as a part of the American experience. The problem was that they saw us less beautiful, less honorable, and less dignified than we saw ourselves. As a child I committed the greatest sin a child could commit, I believed those stories. It wasn’t until several years ago when my nephew died I fully questioned the depth at which the wrong story had penetrated my life and my family’s life.

Why didn’t I allow myself to be proud of my mother who would wake at five in the morning in order to clean for others who had no respect for her at all? She would come home and cook for six small children and anyone else who needed a place to sleep and eat for a month or two until they got on their feet. She was foreign to many in our neighborhood, and that made us foreign. Today, I have learned that our roots are more deeply planted in this ground than any pilgrim or pioneer, but our stories are less often told in the curriculum of schools and when they are, they are tainted.

As I stare at the walls filled with paintings of my family, I sit here and think of my life as an artist, where it started, where I am today. My memories overwhelm my senses. I remember, my mother always in the kitchen, rolling out tortillas with the sound of manteca sizzling. Los Tigres del Norte or Yolanda del Rio’s ranchera music blared throughout our house. In our basement and back rooms, my sister or brother blasted the sounds of Marvin Gaye or Dianna Ross. Everything blended into racket. The smells from the kitchen reached my aching stomach as I waited for breakfast, lunch or dinner. I sat at the table, drawing a low-rider or La Loquita who was always on shirts of people in Lowrider magazine. I was home.

Today, I sit in front of my computer with Buena Vista playing on the radio. The electricity buzzes through my computer. A neighbor cuts with their band saw at a distance. The smell of coffee lingers throughout my apartment. I am in silence, milestones away from those old times. My environment has changed, my spirit for creating, for drawing, has not. One day, after my husband told an elaborate and magical story to my son, he then turned to him and said, “Come to me when you’re 25 and we’ll drink a cup of coffee together while you explain to me that you have now figured out why all stories are true and all stories are false.” Although he was speaking to my son, it dawned on me that those pictures I drew as a child were the pictures of the way I saw myself, as La Loquita from Lowrider magazine.

Although these are real people and part of our culture, it is not the only part. The people that were left out of the paradigm that was given to me were the poets, artists, doctors, lawyers, dancers, and musicians, the heroes. Today I see more clearly. I paint my mother, my grandfather, and myself through a new vision, a vision that is in constant transformation. Any artist or writer knows that when you are creating something, you discover new things by the second and your research never ends. Maybe we put it all together in order for it to make sense in our minds, but we are always moving on to a new time and space that changes our vision and creates other possibilities. I am relieved to get to be the one that tells my story, and not someone else who only has a small idea of who I am.

I am always amazed when people ask me to strip my work of its ethnicity, as if doing so would make it more valid. These people would never take away flags from Jasper Johns, take American pop-culture from Andy Warhol, or take the American diner away from Edward Hopper. I paint what inspires me, what I see, what I feel, that is all. The fact that it is deeply touched by my Mexican roots only suggests that I am deeply touched by my Mexican roots. I am an artist who paints her Mexican family, the people around her, and the experiences that come with that. Through these paintings I say this is who we are, this is how we lived, and this what we fear. I am the person who paints on the red rock walls.”